Shohei Ohtani the undeniable face of 2019

Shohei Ohtani’s historic big league debut wasn’t the only story coming out of the majors this year, but it often seemed like it.

The ups and downs of the hard-hitting, hard-throwing American League rookie of the year captured imaginations on both sides of the Pacific, but there was plenty else going with the other seven Japanese major leaguers while “Sho time” renewed two-way interest in the United States and earned comparisons to the legendary Babe Ruth.

After a winter in which many older free agents were frozen out, Ichiro Suzuki was among those still looking for a job after the start of spring training. An injury opened the door for his return to the Seattle Mariners before his career took an unexpected turn. 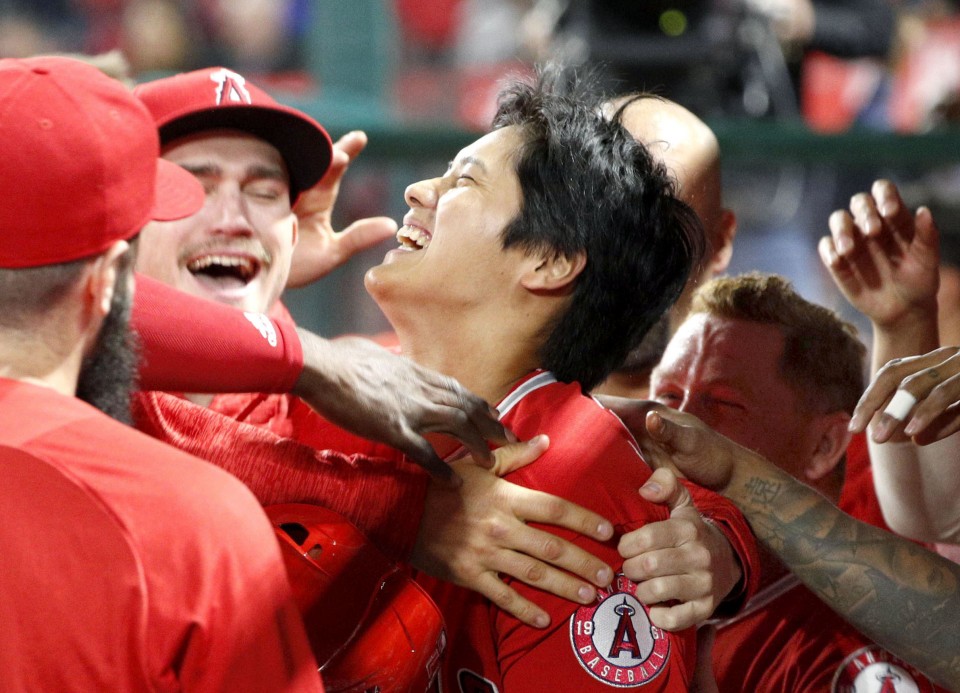 Yu Darvish was expected to be a big addition to the Chicago Cubs but spent most of the year on the disabled list, while right-hander Masahiro Tanaka made a little history in his fifth season with the New York Yankees.

Kenta Maeda entered his third year with the Los Angeles Dodgers with manager Dave Roberts vowing to use the right-hander as a starter again. This gave the National League West three Japanese pitchers with relievers Yoshihisa Hirano joining the Arizona Diamondbacks and Kazuhisa Makita signing on with the San Diego Padres.

Former Boston Red Sox right-hander Junichi Tazawa struggled in his ninth major league season and ended the year teammates with Ohtani in Los Angeles after starting with the Miami Marlins.

Spring training in Arizona was a busy place, and Ohtani credited Suzuki with helping him stay afloat in a maddeningly difficult first spring with the Los Angeles Angels.

Ohtani visited Suzuki after the veteran outfielder returned to the Mariners in the middle of March. The 24-year-old rookie left his boyhood idol with a more positive attitude and finally made a batting adjustment he had been trying to avoid — losing the leg kick he used in Japan. 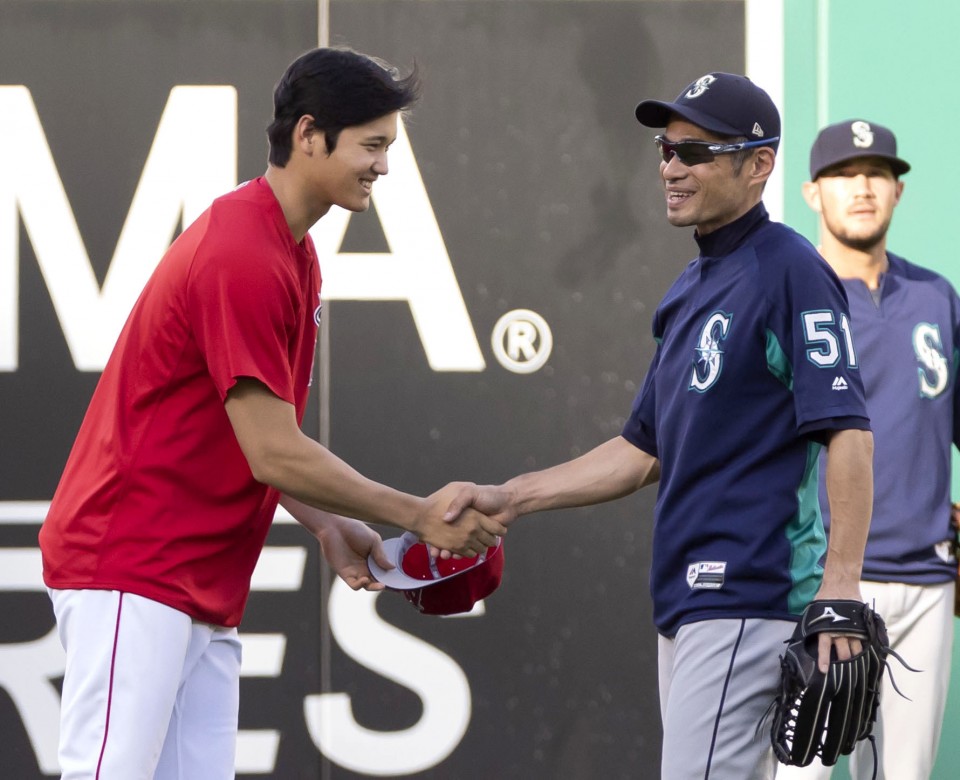 “I came away in better shape, both in terms of attitude and approach, and that’s how I went into the season,” Ohtani told a Tokyo press conference in November. “I am so grateful to (Suzuki) and feel I learned so much.”

“As much as possible I’d wanted to keep the batting form I’d had in Japan, but in the spring I had no sense that I was able to handle the pitching, so eventually I made that slight adjustment and things began to fall into place.”

Ohtani exploded onto the scene and quickly established he could pitch and hit as he had in Japan. A left-handed hitter, the average speed of balls off Ohtani’s bat was 92.6 miles (149 kilometers) per hour, the 11th fastest in the majors among hitters with 150-plus balls in play.

As a right-handed pitcher, Ohtani’s average fastball velocity of 96.8 miles (155.8 kilometers) per hour, until suffering his Grade 2 elbow sprain in June, was second only to the Yankees’ Luis Severino’s 97.6 mph among starting pitchers facing 75 batters up to that point.

But if Ohtani’s batting and pitching prowess was the “A” side of season, the flip side was his elbow injury. Ohtani, however, known for his steadfast commitment to the sport, proved capable of turning even that bad news on its head.

On Sept. 5, the Angels recommended Ohtani undergo Tommy John surgery on his right elbow, a procedure that would prevent him from pitching in 2019. He responded with fury at the plate, going 4-for-4 with two home runs and a stolen base, scoring four runs and driving in three, and being subsequently named the AL’s player of the week.

In Seattle, Suzuki’s playing time with the Mariners ran out on May 3, when the club made the unprecedented decision to move their longtime star into the front office for the remainder of the season. 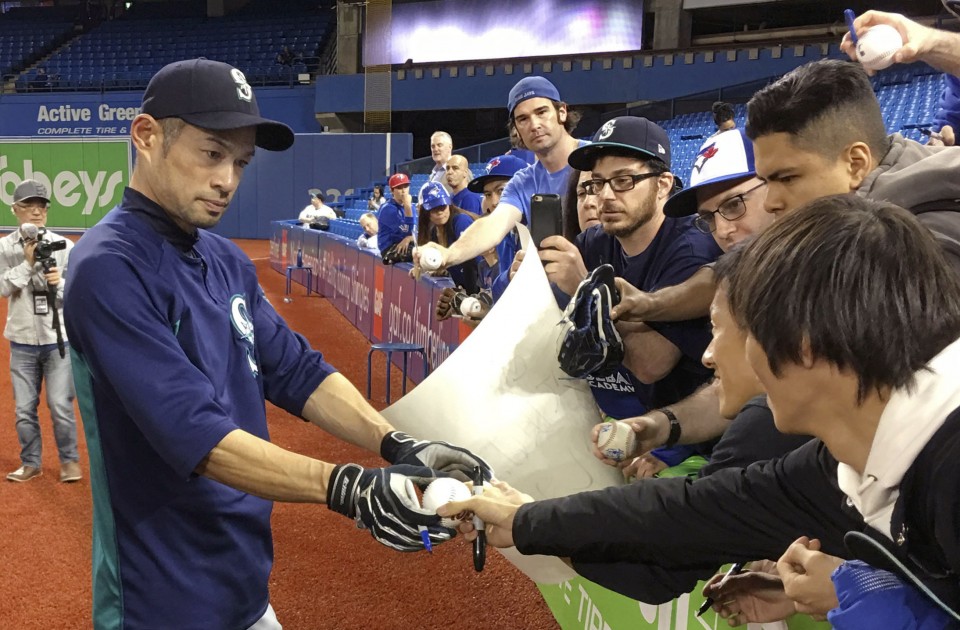 Suzuki continued to practice with the team and served as bench coach when manager Scott Servais was away from the club for two games in May. His Mariners’ role did not preclude a return to active duty in 2019, and with the Mariners set to open their next season in Tokyo against the Oakland Athletics, the chances are strong that Suzuki will once more take the field as a major leaguer.

On the East Coast, Tanaka quietly put together another solid season as he continued his big league evolution. The 30-year-old right-hander, who also missed much of his first major league season in 2014 with an elbow sprain and a slight ligament tear, went 12-6 and recorded at least 12 wins for the fifth straight season.

“I don’t get wins on my own so I am grateful to everyone, but I’m happy to achieve that,” Tanaka said.

In the National League, Darvish pitched in just eight games for the Cubs this season after signing a six-year, $126 million deal with the team. He went 1-3 with a 4.95 ERA before going on the disabled list in May and having minor elbow surgery in September.

In the NL West, submarine right-hander Makita found the going tougher than expected in the big leagues. He had a 5.40 ERA in 27 games and ended the year off the Padres’ 40-man roster after being designated for assignment in November. 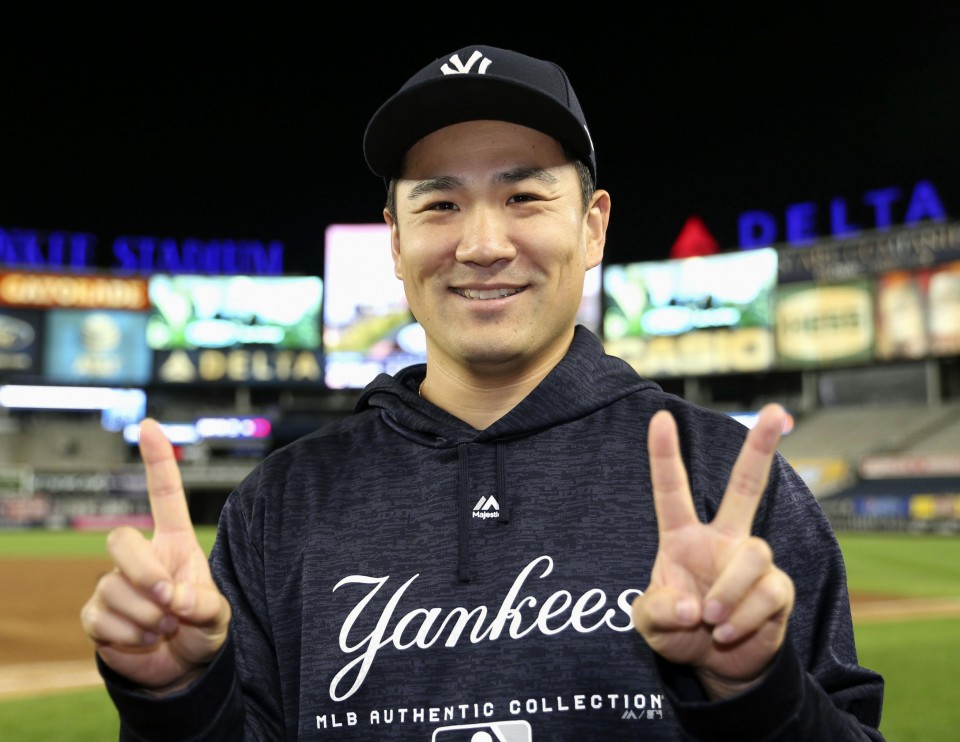 Hirano, however, proved a valuable addition to the Diamondbacks’ bullpen, going 4-3 with three saves and a 2.44 ERA. The 34-year-old set a team record with a 26-game scoreless streak, while his 75 games were the most pitched in a season by a Japanese big leaguer.

As Dodgers skipper Roberts promised, Maeda was back in the starting rotation in 2018, but ended up in the bullpen as he had the previous year. The right-hander finished the season with eight wins, 10 losses, two saves and a 3.81 ERA in 125-1/3 innings. Maeda pitched in eight postseason games as the Dodgers returned to the World Series only to lose for the second straight year.

After posting a 9.00 ERA in 22 appearances, Tazawa was designated for assignment by the Marlins in May and had a brief minor-league layover with the Detroit Tigers before landing in Los Angeles. He was promoted back to the majors in September and finished his lackluster season alongside his iconic Japanese teammate.

Ohtani, who underwent Tommy John surgery on Oct. 2 and finished the season with 22 home runs, was not the only player to make a big splash coming from Japan this season.

Miles Mikolas returned to the majors after three seasons with the Yomiuri Giants of Japan’s Central League, and led the National League with 18 wins and an .818 winning percentage for the St. Louis Cardinals. When the right-hander arrived in Japan in 2015, he had a 4-6 career record in the majors.

MLB Free Agency Rumors: Yasmani Grandal Has 4-Year Contract Offer
Breaking down what LA Angels prospects you could see in Anaheim in 2019