Kevin Maitan getting the Tebow treatment 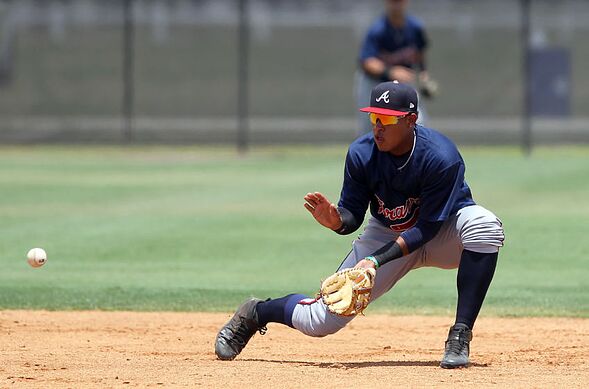 TAMPA, FL – APRIL 24: Kevin Maitan of the Braves sets up to field a ball and then make the flip over to second base during the Extended Spring Training game between the Braves and the Yankees on April 24, 2017, at the New York Yankees Minor League Complex in Tampa, FL. (Photo by Cliff Welch/Icon Sportswire via Getty Images)

The Los Angeles Angels signed a pair of former top international prospects that were removed from the Braves. Yet, only one is getting an All-Star bid, and it’s not the one producing.

When Tim Tebow made the Eastern League All-Star team over more deserving players, people were lamenting his “star” status getting him the spot more than his actual play. Los Angeles Angels prospect Kevin Maitan is now going through the same thing.

The Pioneer League announced the 2018 All-Star roster on Wednesday, and many have glossed over the inclusion of Maitan and even equated his inclusion on the team with Rockies prospect Grant LaVigne. The big difference is that LaVigne is hitting .360/.449/.551 with 5 home runs and 7 stolen bases.

Maitan was followed from the point he just became a teenager. By the time he was signed by the Braves, he’d been a public figure for 2-3 years. He showed up to fall instructs that year for the Braves and put on a show, leaving plenty impressed with Maitan and giving evaluators enough confidence to rank him as high as #32 in the overall top prospect list.

More from Call to the Pen

He showed up at spring training in 2017 for the Braves and struggled to stay healthy through the 2017 season, but he flashed positive things and showed up in offseason workouts notably trimmed up. However, it seemed like once he was let go from the Braves, Maitan let himself go even further.

Frankly, fellow former Braves signee and Los Angeles Angels signee Livan Soto has definitely earned a spot – and he won’t be there. Soto was known for his elite glove, which has been shown this year, but he’s also hitting well, with a .288/.382/.347 line with 7 stolen bases and more walks than strikeouts.

Apply to Call to the Pen.

Start your application process by filling out the fields below

It could be time for the Los Angeles Angels to reel in Kevin Maitan. The more he’s handed things due to his name and not forced to earn his next step, the quicker he’ll work his way out of baseball, which would be a terrible waste of incredible raw talent.