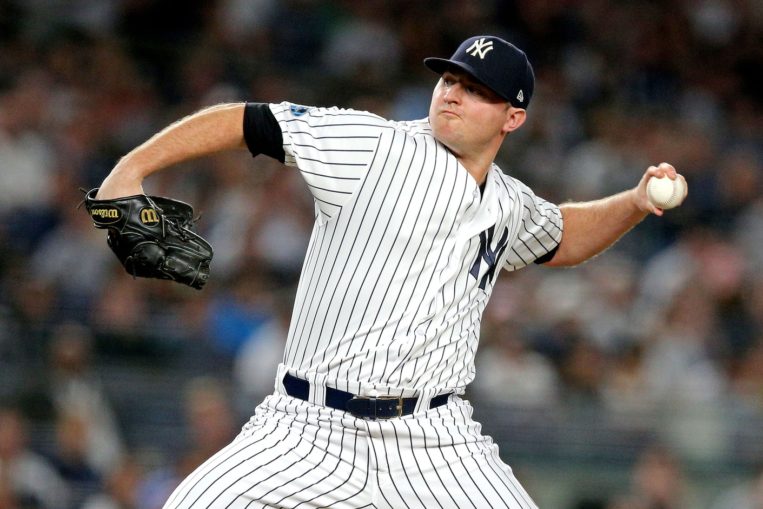 Aside from the New York Mets signing left-hander Hector Santiago to a minor-league deal and trading for defensive-minded center fielder Keon Broxton, there were a few other pots simmering on the hot stove on Saturday.

As per Jeff Passan of ESPN, the New York Yankees have signed left-handed reliever Zach Britton to a three-year, $39 million deal, bringing the 31-year-old southpaw back to the Bronx after coming over in a trade before hitting free agency.

Over the first seven-plus seasons of his career, all spent in Baltimore, the Weatherford, Texas native owned a 3.22 ERA, 3.42 FIP, 1.266 WHIP, and 2.19 strikeouts-to-walks ratio over 306 appearances (46 starts, which for the life of me I can’t remember ever happening).

Dan Connolly of The Athletic reports that “the Los Angeles Angels were the primary finalist” for Britton’s services, “but [the] Yanks delivered on the guaranteed [money]”.

Ken Rosenthal of The Athletic ($) gave an update on right-handed closer Craig Kimbrel‘s market, confirming that the Boston Red Sox, Kimbrel’s most recent employer, are still very interested in bringing back the 30-year-old Alabama native.

“The Red Sox still want Kimbrel,” Rosenthal wrote. “But their desire to retain him is complicated bu luxury-tax concerns and the pending free agencies of several star players.”

He goes on to list a few National League East teams in the Nationals, Braves, and Phillies, as potential fits for Kimbrel — alluding to a race to keep up with our Metsies and their revamped bullpen that now includes Seth Lugo, Jeurys Familia, and Edwin Diaz.

After making $13 million with Boston in 2018, Spotrac has Kimbrel’s value on the market pegged at $16.5 million per season over five years ($82.2 million total).

Ken Rosenthal of The Athletic provided updates on a few notable free agents from around the league (link above; paywall), including Adam Ottavino, Dallas Keuchel, Yasmani Grandal, and many others.

One interesting note from the Long Island native’s diatribe of hot stove goodness gave an additional glimpse into the negotiations between Grandal and the Mets.

“While the Mets did not make Grandal a formal proposal, they talked to him about a deal in the $55 million range and indicated a willingness to go to $60 million,” Rosenthal wrote. “Grandal, however, wanted to be closer to $65 million.”

The Mets, of course, turned their attention to Wilson Ramos and that was that. But now Grandal finds his market to be altogether quiet and his former team, the Dodgers, are knee-deep in their search for a new backstop.

“The Dodgers continue to look for a catcher, and the Brewers, Astros, and Indians are among the teams that still might want to upgrade at the position,” Rosenthal wrote. “Martin Maldonado remains a free agent, and the Marlins’ J.T. Realmuto, the Pirates’ Francisco Cervelli, and the Blue Jays’ Russell Martin are available in trade.”

Jon Heyman of FanCred Sports reports that “two uninvolved executives” see the justification in the Dodgers hypothetically giving up slugger Cody Bellinger in a trade for Realmuto, characterizing the return demand as “not a crazy request”.

Adam Ottavino is drawing interest from the Texas Rangers, as per Jon Heyman of FanCred Sports. The 33-year-old right-hander pitched to a 2.43 ERA, with a 2.74 FIP, and 0.991 WHIP over 75 relief appearances (77.2 innings) last season for Colorado.