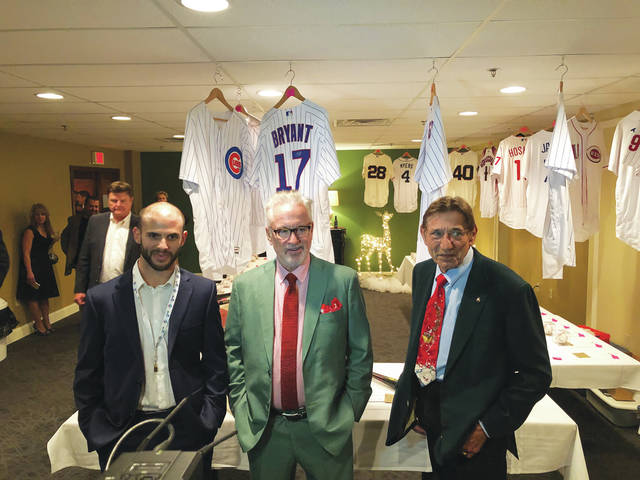 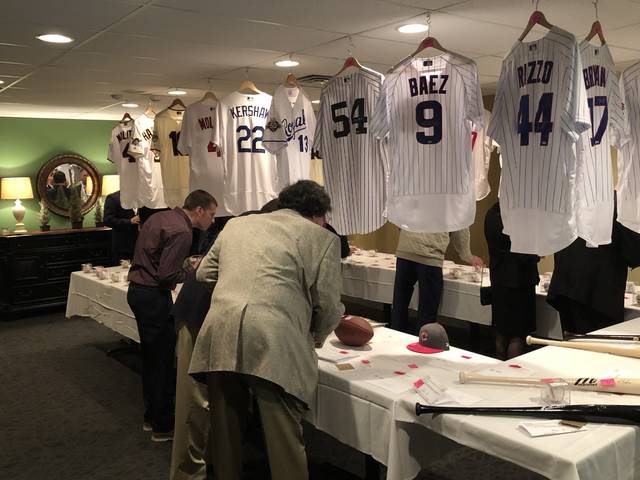 Attendees at the Eighth Annual Around the Horn event participate in the silent auction, mull over what autographed baseball, bat or jersey they are going to place a bid on. –

HAZLETON — A silent auction, big band music, casino games and big-name celebrity appearances were just a few of the many activities Chicago Cubs Manager Joe Maddon had planned for people who attended the eighth annual Around the Horn charity event on Friday night.

“I know we are still met with some resistance around the community,” said Maddon. “I appreciate everything the people have done for me in the community both now and in the past.

“But as we continue to move forward as a world and as a population of human beings, we have to come together as a group. Diversity really makes this whole thing work.”

He continued: “We want to help the Hazleton community and surrounding communities. We are really eager to help other communities. The more we get the message out there the more we will grow. Change is a good thing. It can be an agent of power.”

“I encourage people to go out and meet others,” said Maddon, a three time MLB Manager of the Year award winner. “If you come to our center you will leave with a different attitude after being there for five minutes. These kids speak our language better than us. They are all truly fantastic and raised by wonderful parents.”

The center offers educational, athletic and cultural activities at little or no cost to participants while trying to promote diversity and an understanding of different ethnic cultures throughout America.

“I just want everyone to come together,” Maddon stated. “We are much stronger as a community.”

Baseballs, bats, jerseys and other signed memorabilia were auction items people bid on. Memorabilia from prominent MLB stars Anthony Rizzo, Bryce Harper and Clayton Kershaw were up for bid.

The Chicago skipper tabbed Joe Namath, the iconic New York Jets quarterback, and Tommy La Stella, a utility man for the Los Angeles Angels and former player of Maddon’s, to attend his event and promote the work the charity does for the community.

“It’s invaluable to learn how to collaborate and work together on things,” said La Stella, who led all MLB pinch hitters in hits in 2018. “There’s fitness in numbers. It’s not just about individuality and that’s great. Everything works better when everyone works together.

“I think Joe’s done that his whole career by bringing people together and he’s done a great job of that.”

Maddon and Namath’s friendship dates back to 2012, when Namath managed a spring training game for the Tampa Bay Rays, Maddon recalled.

“I’ve been a fan of Namath for a long time. I even wore the number 12 when I played football to be like him,” said Maddon, 64. “The chance to meet him in person was great. I remember he stayed for the whole game.”

“When I met Joe, I saw the qualities of respect, helping out others and from the way he carries himself,” said Namath, an NFL Hall of Famer. “He helps a lot of people in Hazleton. He’s doing a great job of bringing togetherness in the community.”

“I believe in what we are preaching here,” Namath said about Maddon’s work of preaching diversity and bringing others together. “We have very few constants. Change is one of them. You either move forward or you fall backwards.”

Former champions Larry Holmes and Iran Barkley will be at the event.

“I think there are a lot of benefits to boxing,” he said. “It gives you discipline, it helps you develop a routine and a rapport with others.”

Attendees at the Eighth Annual Around the Horn event participate in the silent auction, mull over what autographed baseball, bat or jersey they are going to place a bid on.